It would be logical to assume that a lushly animated 90-minute feature film based on a charming 45-minute teleplay might be an improvement on the original material. With the removal of physics, live-action special effects, stunt work and the vicissitudes of the elements, an anime treatment should free the filmmakers to tell an even richer, more engrossing tale than the original television episode could.

“Should” is the keyword here, because for all its gorgeous animation and enthralling music, Shaft studio’s Fireworks is kind of a mess.

I’ll explain why shortly, but first I need to make sure you know there’s a huge silver lining in this review and it regards a preview of an upcoming anime that had the audience in our theater utterly enthralled. I’ll get to it at the end of this review. 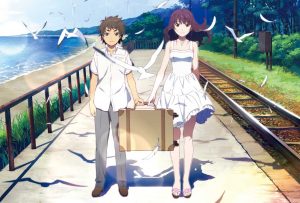 Fireworks is based on an episode of the 1993 Japanese television series If, and in its original form, it is a realistic, endearing look at middle-school friendship, angst and curiosity. Its remake is more than merely a digital rendering of the live-action footage, even if some character design and shot choices are startlingly faithful. It is a re-imagining of the story that takes it into the supernatural with the introduction of a wee glass sphere that hurls the protagonists into a shifting time-loop that lets them restart the fateful day multiple times, attempting different results. It’s essentially Groundhog Day with teen angst, youthful infatuation, quasi-scientific discovery, utterly misplaced T&A, and a buttload of Fresnel lens references.

When Nazuna’s divorced mother elects to remarry and move them both to the new stepfather’s city, she attempts to run away from home with the boy she’d liked from afar, Norimichi. Picking up the unsubtle Fresnel homage of a glass sphere, she begins an odyssey that unwinds like something a horny teen boy would consider profound during what he thinks a psychedelic drug trip might be like. It’s all flash and no substance, with the female protagonist of the film reduced to an object to be rescued by the only character with any semblance of an arc; the boy who finds courage (hooray!) to rescue the girl he can finally admit he likes (hooray!) while scaring the bejeebers out of her frantic mother (boo!) and phasing into psychedelic lighthouse themed force-bubbles (what?). 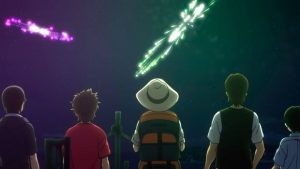 The boy pack tries to keep us close to the road with their expedition to attempt to determine whether firework explosions are round or flat, but they have nearly nothing to do, no character development, and no real involvement in the main story. Their presence is baffling, which is a shame, because they could have provided the context necessary for this whole thing to make any sense. 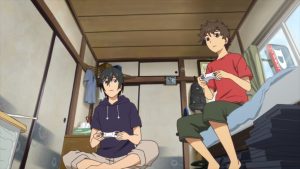 The boy’s best friend Yusuke seems to have the most fleshed-out character, that of the wisecracker with a heart of gold. His attempt to help his friend spend time alone with Nazuna isn’t enough to rehabilitate him, though, after he perved over and openly mocked his teacher’s absurdly large and bouncy breasts during class.  Said breasts, it should be noted, are obsessed over early in the film then later disappear into boyish flatness under a modest yukata, for no apparent reason. Like I said, mishmash. 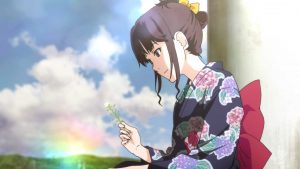 The art is, frankly, stunning. Employing fully an often controversial mix of traditional 2d and crisp 3d computer animation, the animators provided rich, detailed backgrounds, silky foregrounds, a sense of solidity in the physical structures rendered in three dimensions, and an obsessive focus on round things. The Hammer of Thematic Unity drives home the point of roundness in circular staircases, the mystical sphere, firework shapes, Fresnel glass circles, and so much more. It’s a metaphor pounded into the ground and then trampled on by more spheres. It’s a theme poised as depth, but without any – literally any – philosophical underpinnings, it’s just superficial posing.

And then there’s the wince-inducing fanservice, which has no place in this kind of story. When Nazuna starts singing her mother’s favorite song while attempting escape on a commuter train, why would a director choose to focus on the adolescent girl’s posterior under the fluttering edge of a minidress? Having her ass sing to us, instead of, you know, her face, says a lot about how directors Akiyuki Shinbō and Nobuyuki Takeuchi viewed their adaptation: an attempt to be all things to all audiences. Its lukewarm reception in Japan and abroad makes clear that was a poor choice.

So let’s get to the good stuff. Immediately following the feature was a short preview of an upcoming release, and it energized the audience I sat with. With stunning, original animation, a compelling premise and just a few weeks until its release in theaters, Masaaki Yuasa’s The Night is Short, Walk On Girl looks to be an engaging and unusual romantic comedy. Fathom Events, who hosted this feature as well, is already selling tickets for its August 21st and 22nd showings, and I’m excited about seeing it. Want a teaser trailer? Here, have a teaser trailer.

Tickets for the July 7th (dubbed) showing of Fireworks are available via Fathom Events. As always, when you have a local theater that has their Fathom game on, viewing one of these special events is a seamless experience. You can see Fathom Events‘ full schedule of movies, concerts, live theater, opera and more on their website. The summer is packed full of great events, including a bunch of anime unavailable anywhere else.

October 8, 2018 Judith Singer Film, TV & Books 0
Spread the love
Spread the loveFans of sports anime, grown-up romance, and squeeing in a public place surrounded by other happy squee-ers, rejoice! (And plan ahead.) Fathom Events is bringing the entire 2016 series Yuri!!! On Ice to […]

Celebrating the 4th of July – A Different Perspective

July 1, 2020 Splash Staff Family Life 0
Spread the love
Spread the loveRecently Splash Magazines Worldwide received information from a group that has been making the world a better place for 100 years – helping animals around the world and helping vets by pairing them with trained service dogs.  The […]