Oy, it was a Mitzvah that in my lifetime I had the privilege to be a part of a very special event.  Fiddler on the Roof.  Ok, ok, so you’re saying you’ve seen this show a zillion times.  And, yes, I have seen it, it seems, a zillion times – every single version of this play from the time I was a kid until this past week, as Fiddler became my favorite production.  “Why” you ask?  Because the entire 3-hour play is in Yiddish. 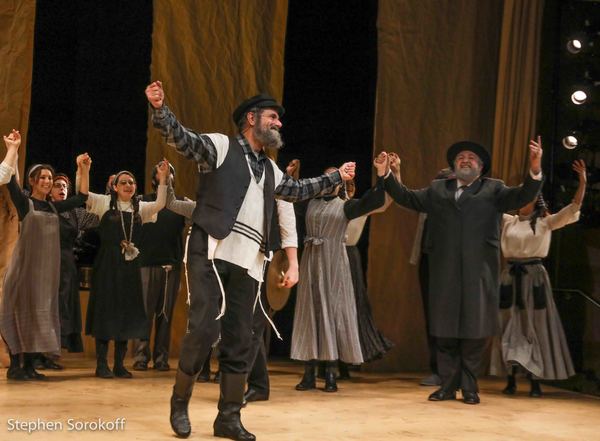 By the way, I don’t speak Yiddish, I understand many words and expressions, but it only added to the enjoyment of seeing this production.

Yiddish for those of you not familiar is a language used by Jews in central and eastern Europe before the Holocaust.  It was originally a German dialect with words from Hebrew and several modern languages and today is spoken mainly in US, Israel and Russia.

That being said, I grew up in the Bronx and lived on the same floor as both sets of my grandparents.  Fortunately, they spoke “Yinglish” which is a combination of both Yiddish and English.  I just remember I understood every word they said and, along with the hand gestures, I was pretty good at Yiddish and Yinglish ( our made-up version of half of both languages, sometimes in one sentence.)

It’s been a long time since the passing of my grandmother, especially, who would make me feel guilty in Yiddish, which she did many times.  I was happily trapped between both worlds. 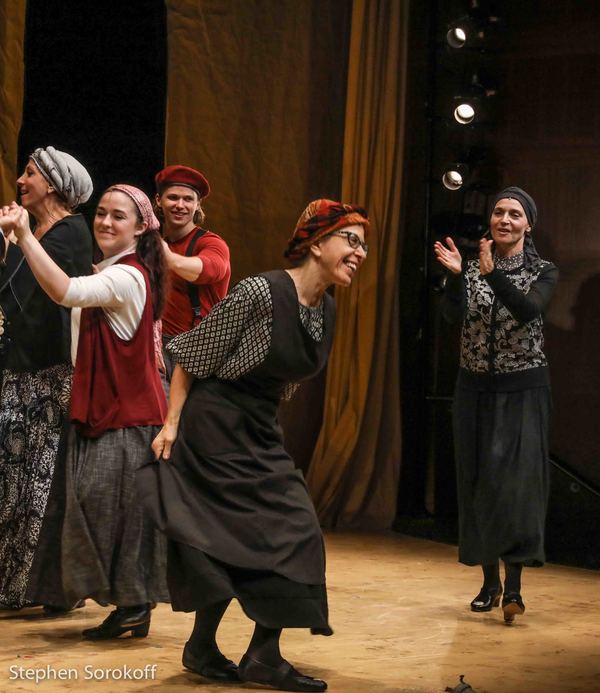 Jackie Hoffman as Yente the Matchmaker

Now, as I approach my 71st birthday, I am invited to see this incredible, mesmerizing production of this iconic play in an intimate stage housed in The Museum of Jewish Heritage.  Where else is the perfect venue to see my now, favorite all-time production of Fiddler on the Roof.  I shed more tears of happiness and sadness in one day while I was a part of The Museum and then in the show. It was a different set of tears; not only sadness to the ending of the production but sadness to possibly the end of Yiddish as we know it.   This, truly, was an experience I will never forget.

Thank you to The National Yiddish Theatre Folksbiene and to Sam Kamelhar, for allowing me to experience the wonder of not only seeing this play, but to see it with Yiddish-speaking actors.

If for a moment you feel that Yiddish is something you know nothing about, there are translations in both English and Russian so everyone can feel at home.  Yet, it’s not about the words, because most people who have seen Fiddler know every word, every song and every scene.

Joel Grey, who is known throughout the world as one of the best actors to have graced the stage and screen, directed this production.  Mr. Grey deserves a Tony Award for his work on bringing Fiddler on the Roof to Life once again.  In this world we live in, we need to hold on to Tradition.  It is, for many Jews, going away as our children marry outside the faith. 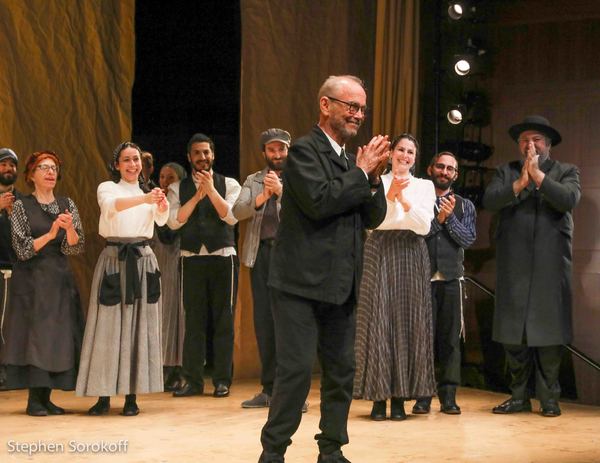 I saw on the news this week that only 22% of millennials do not know what the Holocaust actually IS, and it breaks my heart.  And for my grandparents, all who came from Poland & Russia, they would never imagine NOT speaking Yiddish in our household.  Those were the days when, on Friday night, Chicken soup and matzoh balls filled all 6 floors of our building as the entire family came together for Shabbat.  Even if there were ‘electronic devices back in the day,’ we would most certainly have to leave them at the door while we prayed and ate together as a family.

Paul Burg, a Holocaust survivor, said on the cover of the playbill, “Our tradition to perpetuate the Jewish culture is now in OUR hands.  Let us Keep YIDDISKAYT ALIVE for our grandchildren.”

During this moving production, with actors who learned Yiddish to become part of the cast, I kept thinking about how Judaism in my family wanes due to intermarriage and how we so try to keep it alive and enjoy our heritage with stories and conversations that keep our grandchildren interested in knowing where we came from.  On a personal level, we must continue to encourage our schools to teach our students about history and The Holocaust, because, in one form or another, it keeps coming back and haunting us in different ways.

The production was Magnificent, Brilliant, Intense and Powerful.  There are so many words to describe this production.  In a smaller, intimate stage, this huge cast of multi-talented actors and singers bring Anatevka to life.  A mesmerizing Tevya (Steven Skybell), Golde (Jennifer Babiak) and ensemble bring us to their little town and it goes from joy to sadness.  As I watched Yente the Matchmaker ‘(Jackie Hoffman) do her thing,’ I didn’t realize that I hadn’t looked at the translation because I was so transfixed on her performance. 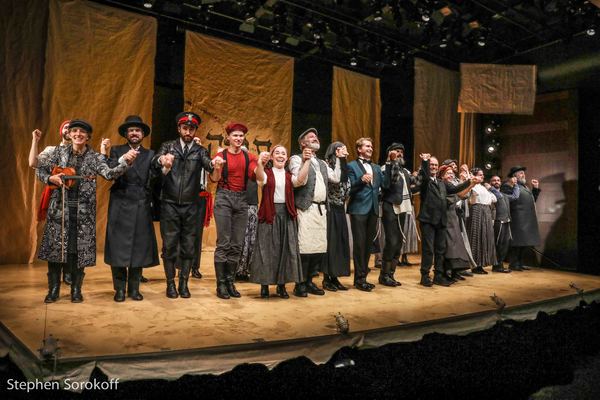 Curtain Call for an INCREDIBLE CAST

I remember seeing my first production of Fiddler on the Roof back in the 1960’s with a group of Nuns sitting beside me.  “Nuns” I said to myself.  Don’t you have to be Jewish to see this show?  Wasn’t it a requirement?   Times has told me quite differently that everyone, especially non-Jews MUST see this production.  Whether the story is in Yiddish or English is no matter.  The story is still told and should continue to be told as we try and live in a world of change and tolerance.

In my opinion, this version of Fiddler on the Roof should make it’s home here permanently and run until everyone has the chance to see it.  Oh one thing:   Bubbie you would be proud. 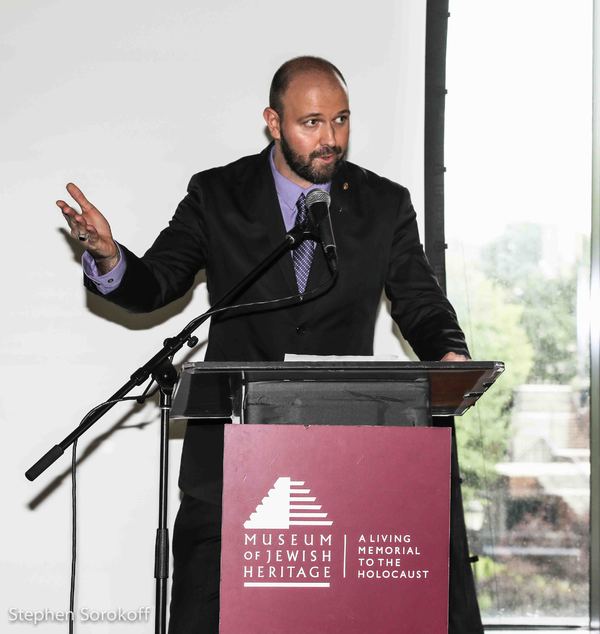 This production of Fiddler on the Roof is being presented at:

The Museum of Jewish Heritage

PLEASE NOTE:  THIS PRODUCTION IS SCHEDULED TO RUN ONLY THROUGH SEPTEMBER 2nd.  TAKE SOMEONE YOU LOVE, JEWISH OR NOT, MAYBE YOUR GRANDCHILDREN, YOUR SPOUSE OR YOUR BEST FRIEND.  YOU WILL WALK OUT A DIFFERENT PERSON.