Summertime in Chicago is almost over, which means that festival season is coming to an end.  That is why Chicago throws North Coast Music Fest:  to send summer out with a BANG!  North Coast has it all – great music performed a-list musicians, great artwork by some talented artists, but most of all it’s an excuse to dance and dance and dance some more.  From funky jam bands to electronic dance music to rap to R&B, there’s something that will get just about anyone moving. With three stages, a dance stage and a silent disco over three packed days, there was so much happening it is hard to recap all that went down.  But here is our attempt with photos to back it up:

Chicago in the late summer is beautiful enough, but North Coast took the liberty to accentuate that beauty by placing art all over Union Park.  Graffiti artists spray painted live and up close.  Some allowed the crowd to pick up a can and participate.  There was art on walls, art on people, art in the park, there was art for all!  North Coast attendees could admire, appreciate, contemplate all the art, but most importantly take selfies with it.

A dance party without sound? What the?  Yep, the North Coast Music Fest had a Silent Disco area with not one, but two DJs performing simultaneously.  Everyone in the Silent Disco was handed headphones that could switch between the two DJs sets. So even if you didn’t like the music your date was listening to, you could still dance together.

The fashion is becoming a highlight at North Coast Music fest.  People go all out, with different wardrobes for each day.  We saw it all: neon, leopard print, costumes, hippie chic, some devilishly fun demon horns and lots and lots of glitter.  Anything goes, as long as you can dance your ass off in it.  The styles at North Coast are an attraction onto themselves. 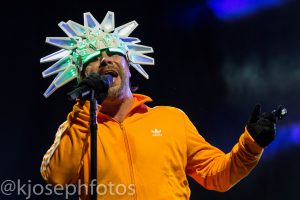 After two night of having to cancel the headliners because of terrible weather, there was a lot of pressure on Jamiroquai, who headlined Sunday night.  The pressure was heightened since the band hadn’t played in Chicago for over 17 years.  However, wearing an amazing neon helmet, Jamiroquai was up to the challenge and delivered an epic set.  The “future funk” sound washed over the Union Park crowd like a funky viurus that was so infectious nobody could resist shaking what their momma gave them.  Jamiroquai had the whole place dancing like they “got canned heat in their heals tonight, baby!” 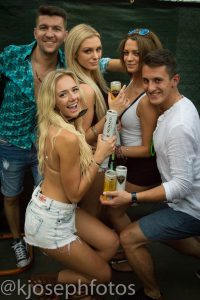