Based on real-life Master Classes La Divina taught at Julliard in 1971 and 1972, Terrance McNally’s Tony and Drama Desk Award-Winning play is a fictionalized account that gives a basic structure that allows the actor playing Callas to reflect on her own life and career, and the discipline and sacrifices such grand careers require. It’s a wonderful setup for what could be a wonderful story, but McNally seems more interested in musing on what it takes to be an artist than on what it takes to be Callas, in particular.  And that’s both bad and good. 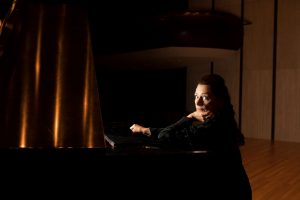 There’s a lot of biography here, don’t get me wrong.  The major portions of her life are discussed and she draws lessons from it for the parade of three students, from the hopeless, lighthearted ingenue Sophie, to the pro tenor Tony, to the diva in the making, Sharon.  We hear a lot about the grit and determination that it took for Callas to rise from rejected, fat and unattractive child, to the world’s greatest opera diva of her era.  And she dispenses a whole lot of helpful advice, in an amusingly self-centered way, as one might imagine a diva would.

The play often breaks the third wall and Callas talks directly to the audience as if we were the other students watching the Master Class.  There are laughs in the play. Though the audience I attended it with were over-generous with their laughter. And there’s a great deal of good advice for anyone who wishes to be an artist at any level.

Takeaway lessons: be authentic, work hard and then work even harder and then work some more, make sure you have “a look” so that people remember you, always be over-prepared, believe that what you’re doing is important.  Believe that art can make people’s lives better. That’s not bad advice for anyone, and it is delivered in quite an inspiring way by both playwright and actors. 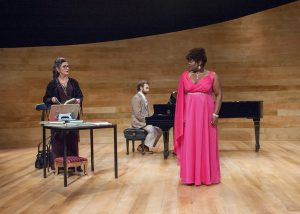 The rest of it is jamming the caustic Callas up against tender students, much to their dismay. I found their dismay to be rather hard to believe as well as their lack of basic understanding of what you’d do on a stage when you showed up to sing.  It’s supposed to be Julliard, for heaven’s sake!  You have to go through layers of brutal auditions to get into Julliard, let alone a Master Class at Julliard. You have to have a resume of performances and letters of recommendation from teachers.  That they would be so naïve is utter and complete nonsense and McNally would have known better, so it’s just silly for the sake of cheap set up of the not-compelling conflict.  This is not a play that hits you in the feels.

And what Callas says that makes Sharon run off crying? Simon Cowell has said far worse on American Idol than Janet Ulrich Brooks as Callas dispensed on that stage to the supposed Master Class-level students. By the time you reach Julliard, you should have been told you were the most worthless piece of garbage that ever dared open your mouth, and if you were still at Julliard, you would have grown a thick enough skin to take it.  To take abuse and listen carefully to find whatever wisdom could be gleaned among the soul-crushing insults.  That’s the nature of the business. If you have real talent, half of the people in charge of teaching you will view you as a threat to be neutralized rather than an artist to be nurtured.  It is possible someone like Callas could be that way. Someone who was world class and then lost it due to illness.  At the very least someone known to be as tough as she was would be tougher than this. McNally shows his extreme fanboy nature here, I think.

Brooks does a yeoman’s job as Callas, no question, with what she’s given. It’s really the play’s odd structure and rather shallow look at Callas that is at fault.  But those nuggets of wisdom about working for your art, like you’d get in a real classroom, make it well worth watching, as do the performances of the actors and singers in Timeline’s production. 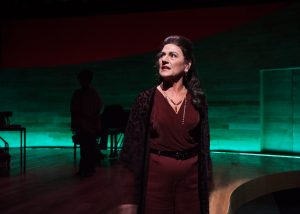 Brooks holds the stage as Callas, but only that. She’s about a decade older than Callas was when she taught at Julliard and plays her older still, this Callas feels like a well-preserved 65-year-old, not the 48-year-old she would have been.  Brooks does a nice accent. She’s nicely professorial when she’s giving advice, but you don’t see the fire Callas was known for anywhere.  She’s calm and ironic, and she should be a powder keg waiting to blow.  You see Stephen Boyer as accompanist Manny sort of cowering away from her here, but Brooks never gives us any reason to fear her and the script downplays her famous feuds and supposed diva fits as well. Brooks could have chosen to play against those lines and made us fear her wroth, but instead, she’s chosen to make them be true and portray Callas as a dedicated, hardworking and even-keeled sort of person.

Perhaps this was the direction if so, it removed even more conflict from the text.

And while Callas had “lost her voice” by the time she was at Julliard, what that meant was that she wavered a bit in the very highest part of her register, enough so that the opera critics would have killed her had she dared to take the stage at La Scala. We hear a couple of lowish tones out of Brooks here, but it would have worked a lot better with a singer as strong as those playing the students in this role.  No one can be Callas, but Patti LuPone played this part, and someone who can produce some strong notes would only add to the production.  Especially as we see her caught up in flights of memory and as she tells us about how she approached her work on stage.

The students and the singing are really the delight of this production, Molly Hernandez as Sophie does a lovely job with Bellini’s “Ah! Non credea mirarti” her fluid, light voice working well for this youthful role.  Sadly, her character seems dumb as a box of hair and exists only as a jumping-off point for Callas to tell us about her own youth. Sophie’s naivete is grating to anyone who has ever auditioned for anything in their lives. It’s grating to anyone who has been to a job interview.

Eric Anthony Lopez as low-tier pro tenor Tony shows what he’s got in the wonderful “Recondita armonia” from Tosca and is almost summarily dismissed. Because he’s the real deal and is going to make it at some level. His obnoxious hubris is every tenor everywhere from a lifetime of being told how wonderful he was and he was fun to watch here. Callas gets to do the tenor jokes and it’s funny because it’s true. 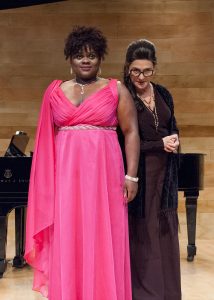 Keirsten Hodgens as Sharon, in the role that won Audra McDonald a Tony, is the highlight, though. She’s been one in every production I’ve seen her in around town, and she crushes Verdi’s Lady MacBeth’s “Vieni! T’affrenta!” She’s the one student that actually talks back to Callas in the production, though her “I don’t want to be like you” is very lukewarm emotionally, like everything in this version of the play, her singing is fabulous. She has a real voice, and though she’s playing it straight here while still showing off incredible vocal flexibility and flair, it’s not quite the style you’re going to hear gracing the stage at the Lyric.  But you do believe she could if she wanted to.  Brava, diva!

All in all, Timeline’s done a good job here. The actors do a good job and make an entertaining night of theatre.  I just wish the play had more depth and Brooks had decided to portray Callas with a bit more fire.

You should go for the singing and for the inspirational speeches about the importance of hard work and art.  Those are actually the important takeaways.  And I think the real Callas would most likely have approved of that.

Note here, the lighting, sound, and costume design were all excellent, if simple, and those involved should be commended.

Master Class is being performed at Stage 773, 1225 W. Belmont until December 9th.  Tickets can be purchased here.

All photographs by Joe Mazza.

March 7, 2018 Suzanne Magnuson ARTS & CULTURE, Music & Arts, WORLDWIDE 0
Spread the love
Spread the loveThere’s a reason it’s the world’s most popular and the Met’s most-performed opera. It’s one of the few where literally everyone is likable.  There are no villains, only the occasional foil, and the […]

June 18, 2022 Joe Gruberman Music & Arts 2
Spread the love
Spread the loveFresh off of its premiere engagement in Chicago, Artopia arrives in downtown Phoenix with its signature display of outsized street art blanketing the facade of a recently vacated warehouse. A hint of what […]

Eugene Onegin at the Lyric Opera – Subtle, Beautiful, and So Russian

March 1, 2017 Suzanne Magnuson Entertainment 0
Spread the love
Spread the loveWhether or not you’re familiar with Alexander Pushkin’s acclaimed poetic novel on which the opera is based and takes much of its lyrical inspiration, you likely know the story of Eugene Onegin already. […]