Hyde Park’s Court Theater in Chicago has outdone itself this 2018/19 season with its current running production of Manual Cinema’s jaw dropping adaptation of Mary Shelley’s Frankenstein, just in time to celebrate the bicentennial of the novel’s original publication. Frankenstein is devised by Drew Dir, Sarah Fornace, and Julia VanArsdale Miller, with concept by Drew Dir and original music by Kyle Vegter and Ben Kauffman. 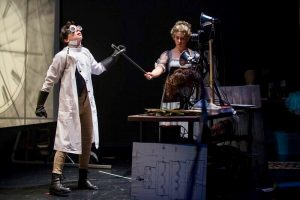 Love, loss, and creation merge in unexpected ways in this thrilling classic gothic tale conceived by Manual Cinema. Stories of Mary Shelley, Victor Frankenstein, and his Monster expose how the forces of family, community, and education shape personhood—or destroy it by their absence.

In a special world premiere presentation, internationally-renowned multimedia company Manual Cinema stitches together the classic story of Frankenstein with Mary Shelley’s own biography to create an unexpected story about the beauty and horror of creation. Manual Cinema combines handmade shadow puppetry, cinematic techniques, and innovative sound and music to create immersive visual stories for stage and screen. Manual Cinema is a performance collective and film production company, founded in part by former Court dramaturg Drew Dir.

Charles Newell, Court’s Marilyn F. Vitale Artistic Director notes, “We are absolutely over-the-moon to host the world premiere of Manual Cinema’s most ambitious piece of storytelling to date. Three of Manual Cinema’s Co-Artistic Directors—Drew Dir, Sarah Fornace, and Ben Kauffman—are alumni of the University of Chicago. Sharing the work of talented UChicago alumni with our audiences is yet another outstanding aspect of this already thrilling collaboration.”

The show by Manual Cinema was unlike anything I had ever witnessed at the theater. When my friend and I attended the performance, we assumed it was simply going to be a stage version of Frankenstein with actors who perform a play with their lines memorized. We were very wrong. It was truly an amazing experience of something even better on the stage. There were multiple mediums to tell the story of Frankenstein, such as the actors/puppeteers who incorporated and implemented paper puppets, lighting, projections themselves as silhouettes, and video.

As amazing as the production was, at times it was a hard decision for us (and I am sure the rest of the audience), whether we should keep watching the screen for the full theatrical effect of the performance, the puppeteers working their magic, or the musicians creating the score and sound effects. We finally decided to watch and take in all three elements, which made the show even more exciting and astounding. I was also amazed by how puppeteers and musician memorized the entire performance; it was like a dance with each movement and step in synch with everything else.

The cherry on top was when the performance concluded, and the cast allowed us come up onto to stage to see and play with the puppets and instruments they used. They explained and demonstrated in detail how the entire production was created and performed for the audience. It was also very hands on and interactive. We were allowed to try to manuoulate the puppets, as well as being behind the scenes of the videos and special effects.

If you are a fan of Mary Shelley and the timeless, haunting tale of Frankenstein, prepare to be wowed beyond belief with Manual Cinema’s once in a lifetime retelling of the classic novel brought to life onstage.

For more information, or to purchase tickets, visit the Court Theater website.

July 6, 2022 Jennifer Lunz Entertainment 0
Spread the love
Spread the loveIf you are looking for Chicago Theater that is different, unique and inspiring, do not miss Mohegan theater-maker Madeline Sayet’s Solo performance, “Where We Belong”, at The Goodman Theater in the downtown Loop […]