Sammy Hagar was a busy fellow on June 28th and June 29th. The entertainer know as “The Red Rocker” was in Las Vegas for an important announcement and a special event.

Hagar, who gained notoriety as the lead singer with the Van Halen rock band, was inducted into the Rock and Roll Hall of Fame in 2007. Now he is an active owner of the famed Cabo Wabo Cantinas in Cabo San Lucas, Hollywood, and Las Vegas and markets well known brands of tequila and rum. It was both his talent and his liquor that brought him to town.

In true Las Vegas fashion, Sammy’s residency was announced on the 109th floor viewing area of The Strat on Monday June 28. He told the press that his initial shows would be October 29th and 30th and November 5th and 6th, 2021 in the the intimate 800-capacity Strat Theater, including 300 GA floor tickets for a party vibe in front of the stage. Residencies are then planned monthly in 2022.

Sammy said that the show would, “be a party and not a concert.” He plans to have several of his music friends join him for the shows and shared that the 800 seat showroom will be decorated like a Cabo Wabo Cantina.

“I’ve been searching the Las Vegas Strip trying to find the right room, ambience and partners to create a very special Cabo Wabo birthday bash type environment for my band members and musician friends to create the ultimate party residency,” said Hagar. “Ladies and gentlemen, welcome to ‘Sammy and Friends.’ You all know the rules. There aren’t any.”

Stephen Thayer, vice president and general manager of The Strat, and Adam Steck, CEO of SPI Entertainment, commented during the press conference following the announcement. Thayer was proud of the many improvements and upgrades that Golden Gaming has implemented at The Strat. Steck is now managing the showroom and will be producing several shows in addition to Sammy’s.

Michael Anthony, the legendary bassist who’s played with Hagar for the past 30 years in bands including Van Halen, Chickenfoot and The Circle and Vic Johnson, Hagar’s longtime guitar virtuoso and bandmate in The Circle are confirmed for the first four shows.

Jason Bonham, the acclaimed Grammy-winning drummer and their bandmate in The Circle is confirmed for the first two shows, Oct. 29 and 30, with surprise and special guests to be announced.  The theater will be designed to capture the beach vibe he’s synonymous with, including elements of Hagar’s famed Cabo Wabo Cantina in Cabo San Lucas, home to his epic annual birthday bash.

Don’t even try to get tickets to the October and November shows; they sold out two hours when tickets were released. More information about the show is available at TheSTRAT.com and Sammy Hagar’s website RedRocker.com.

Sammy spent much of Tuesday June 29 at the Nightclub and Bar Show at the Las Vegas Convention Center. The show, designed for members of the nightclub, bar and restaurant industries, includes a range of seminars and product exhibits for folks in these industries.

Crowds gathered behind the ropes to get a glimpse of Sammy walking the red carpet. He told reporters that some of the profits from his various industries are passed on to charities such as Core and Southern Smoke that support members and their families in the restaurant and bar industries.

Sammy was the speaker at a fireside chat at which he discussed much of his career related to the nightclub business. He proudly announced that he started Cabo Wabo Cantina in Cabo San Lucas, Mexico 31 years ago with some members of Van Halen. The cantina went through some hard times, but it is now successful and an additional Cabo Wabos are located in Hollywood and in the Las Vegas Miracle Miles Shopping Center

Sammy is heavily involved in the spirits industry. He founded Cabo Wabo tequila in 2007 and sold it in 2010. He is now back in the tequila business having founded   Santo Tequila in partnership with Guy Fieri and now actively marketing the brand. The product is the only spirit that is a combination of tequila and mezcal and is made from the quality portions of the agave plant.

He started Sammy’s Beach Bar Rum in 2011 in partnership with singer Rick Springfield. This is a high end, small batch rum which is available in a variety of flavors. Sammy said that the sugar cane supply in Hawaii is drying up and he is now using Puerto Rican sugar cane in the product.

Sammy also announced that he will be launching a line of ready to drink cocktails in the autumn of 2021. According to Sammy, the line of Sammy’s Beach Bar Cocktails  will contain high end ingredients and outperform competitive products.

Sammy concluded his chat by again announcing his upcoming residency at The Strat. Beginning in late October. He then headed to the Cabo Wabo Cantina at The Miracle Mile to pour rum drinks. Wish I had his energy. 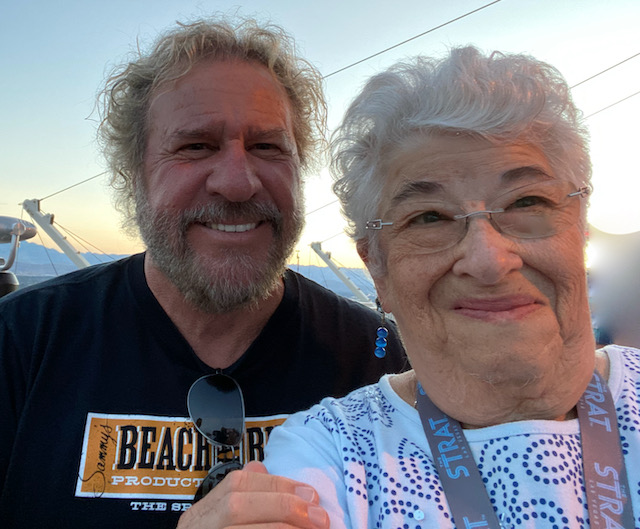 Reporters note:  And while I may not have his energy, I did manage to snag this selfie photo with Sammy Hagar.  Pretty cool, huh!

Vegas Uncork’d by Bon Appétit – A Taste Like No Other

April 13, 2018 Stephan Martin Events 0
Spread the love
Spread the loveIf you ever wanted to experience food from some of the finest chefs in the world all in one city for four fabulous days, there is really is nothing that can quite compare […]

August 2, 2021 Stephan Martin Restaurant Reviews 0
Spread the love
Spread the loveFootball is back and Las Vegas finally gets to allow fans to experience the Las Vegas Raiders in person at Allegiant Stadium. While attending a game in person is the ultimate experience, ticket […]